We use cookies to provide you with certain functionality and to ensure the best possible user experience. By continuing to use this site, you agree to our "Privacy Policy"

Тhis year’s competition FORBES Business awards, organized by the prestigious international magazine Forbes, acknowledged agriculture as one of the sectors, shaping the economy of our country. The ceremony took place on 28.01.2020 in Sofia Event Centre and was attended by representatives of nearly 100 of the biggest companies in the country. Hardly ever have so many entrepreneurs have gathered in one place as at the concluding ceremony of the FORBES Business Awards 2020.

The whole hall was overwhelmed by the excitement of the winners, by their words upon receiving the FORBES Bulgaria awards. This competition fosters the entrepreneurial spirit, good business practices, and social responsibility, it inspires Bulgarians to pursue their dreams.

The distinguished with the statuette of honour included a company in the agricultural sector, well-known to all of us, which proved that its contribution to the development of the sector is visible not only to us, agricultural producers and professionally involved journalists, but also to the people outside the sector, who seem to be far removed from agriculture and the difficulties it encounters in Bulgaria. For the first time, a company from the agricultural sector was admitted to the competition and distinguished with excellence. This is NIK, a company we all associate with “precision agriculture” and “innovations”. It was namely the innovations in the sector, which impressed the panel, selecting the winners. We are talking about innovations such as soil analyses and soil mapping, variable rate fertilization, automatic tractor control and many others, which are already an integral part of the daily life of many farmers.

To receive the award on behalf of the company on the stage appeared Kaloyan Kumanov, who is one of the people behind the company and he shared the following:

“Agriculture is one of the sectors, which largely influences the daily life of people. Each of us can be grateful and feel respect for the work of the farmers at least three times a day – at breakfast, lunch and dinner. However, being a farmer today is a great challenge – to produce quality and clean food, moreover at a reasonable price. It is in this challenge that we help the farmers. We believe in our mission and it is the mission of the company’s whole team, to whom I would like to express my gratitude that they are working to achieve it on a daily basis. I would also like to thank Forbes’ team for acknowledging agriculture as an important sector”.

This recognition is not only a recognition of NIK as a company, but a recognition of agriculture in Bulgaria in general and its development during the last year in terms of technologies and its significance to the country’s economy.

A new brand in NIK's portfolio

The new solution from NIK and the Italian brand MC Electronics is your most accurate* tool, that offers full seed flow monitoring during the a...

NIK is among the 50 best employers in Bulgaria

NIK with a well-deserved place in the Career Show Index 2020 – the prestigious ranking that honors the best employers in Bulgaria. This week it ... 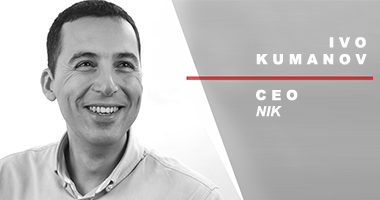 “Question of courage” with Ivo Kumanov- interview with Manager News ...